Mari makes handmade kettles to be sent around the world 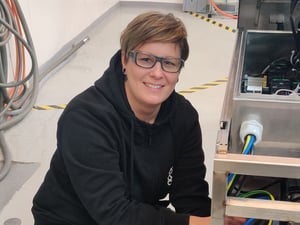 At Mari Vanhanen's workstation at the Dietatec factory a mixer kettle is in production. There are no conveyor belts or assembly robots to be seen anywhere - that’s because Mari's work is handmade.

Mari enjoys working with her hands and seeing her own handprint in the end result. She also loves the idea that her own creations are fully modern professional kitchen kettles that go straight from the factory to customers - anywhere in the world.

A multi-talented manufacturer who enjoys craftsmanship

Mari Vanhanen, who works on the mechanical assembly side of the Dietatec kettle factory, thinks the best part of her job is the hands-on experience. And there's plenty of it because at Dietatec all kettles are handmade by the professionals in the production.

Mari has a degree in metal artisan and has an in-depth knowledge of metal and its processing. Her choice of profession alone shows that her own vocation lies in handicraft.

"Everyone in my family works with their hands and I think that's where my interest comes from. I like to create things and then see my own handprint," says Mari.

Before joining Dietatec, Mari worked as a workshop supervisor in a company specializing in maintenance for the food industry, where she received and manufactured various orders. Mari has now been with Dietatec for just over three years. She originally joined the company as a mechanical assembler of kettles, but recently she also started an apprenticeship as an electrician.

Mari is becoming a true multi-talented production worker, capable of handling a wide range of metalworking tasks as well as electrical work that requires dexterity.

Human-made kettles for the world

Dieta's kettles are human-made - they don't slide along a conveyor belt and aren't assembled by robots. What does this mean to Mari?

"Professional pride. The quality is really high and we, the manufacturers, monitor it all the time while we work. We have a small and close-knit team at the factory, but we still make products that are sent all over the world. It's great," Mari says proudly.

At the factory, Mari has her own workstation where she has her own tools. There, in Mari's hands, a customer's kettle is built for their selections. Kettles that are not customized according to the customer's wishes are built quite routinely. But just because routine is part of the job doesn't mean that the work is boring. Occasionally, there are also more unusual implementations where you have to deviate from the usual pattern.

"And yes, there are new projects coming up all the time. The kettles to-be-made change with them," Mari says.

Becoming a self-made kettle manufacturer doesn't happen overnight. Mari estimates that you can learn to make so-called easy kettles in a few months. However, she considers six months to one year to be a period of time after which a new manufacturer starts to become quite skilled, and the manufacturing starts to go well. Apart from the fact that learning takes time, independence and responsibility for one's own work are an integral part of the job description. These things together underline the fact that, as a Dieta Kettle maker, you can and should be proud of your own handiwork.

Free time dedicated to the dog, sport, and music

When Mari takes a day off after work, a happy dog-friend is waiting for her at home. The dog takes up at least some of her free time every day for a walk, and she often has other things to engage with them.

In addition to the dog, Mari is also passionate about sports, and martial arts in particular are close to her heart. "Most recently, I've been practicing Brazilian jiu-jitsu. Of course, due to the world situation, this has also had to be put on hold for a while now. I'm also interested in other sports," Mari says enthusiastically.

Mari also enjoys going to gigs and festivals. Now that a few festival summers are almost completely canceled, Mari is looking forward to the return of music events.

If you found Mari's introduction interesting, get to know our other personnel too:
Ville-Veikko Litmanen started as Dietatec’s Managing Director Read the blog >

Go back to the Chef's blog page